Rzepecki Auto Jabłonna – This is a company which emerged from one of various passions of Maciej Rzepecki, an engineer who could compete with Leonardo da Vinci himself in terms of  variety of interests. This pilot, sailor and constructor, and also an enthusiast and collector of old cars, set up a car service in 1985 where the old cars were restored from time to time.

Over the years, owing to the owner’s passion, the garage turned into a proffesional clinic where old cars were brought back to their best under special care of the best specialists. 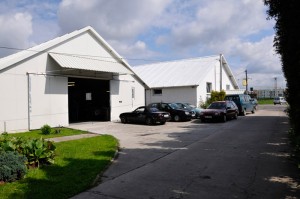 The company owns two high-tech garages where the incredible glitter and technical efficiency were given to the cars of British brands such as Jaguar, Aston Martin, MG, Lotus. Yet, specialists from Rzepecki Auto Jabłonna are also familiar with brands such as Mercedes, Volvo, Ford or Fiat. What is more, they also take orders for completely atypical models. 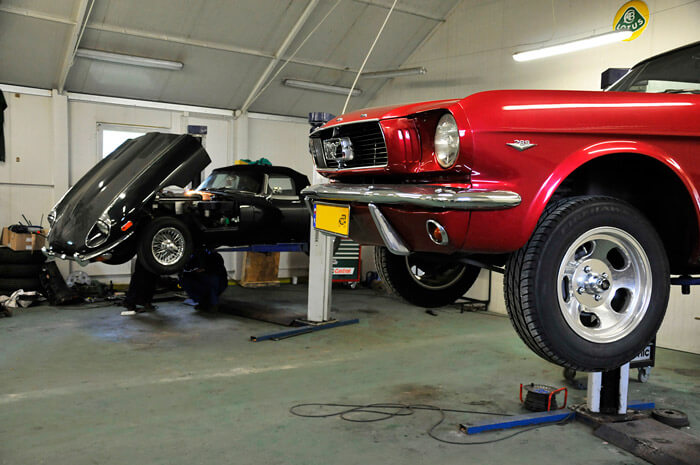 The company’s customers are ’fans of automotive relics from Western Europe (Great Britain, Germany, the Netherlands, Denmark, France) and from Poland. Over a year nearly 20 renovated cars leave the garage to become the pride of their owners and win great awards in various competitions.

The philosophy of Rzepecki Auto Jabłonna is to take care of both the car’s look and the comfort of ride. That’s why the renovation process is very meticulous and starts from taking the car to pieces. It enables engineers to check their condition precisely and assess which pieces could be appropriate for reassembly. The coachwork is exposed to the proccess of sandblasting which removes the old paintwork and unveils places where the corroded elements need to be replaced. All mechanical parts get refreshed and secured. Missing parts which cannot be purchased any longer are remade on the basis of the original ones. The whole renovation proccess is kept on record and the owner receives a book with the historical record of works along with their glossy and efficient car. All renovated cars are covered by a two-year guarantee. 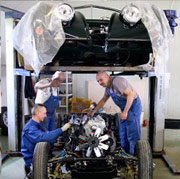 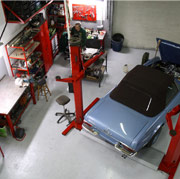 Rzepecki Auto Jabłonna secures comprehensive renovation on the highest level from purchasing the dream model to departure in a car in full working order which looks as if it has just left the assembly line. Accomplishments of specialists under the command of enginner Rzepecki include reconstruction of a car using only 50 % remains of the original one or bringing back to life a flooded Mercedes 220 SE from 1952.

Such accomplisments are highly valued by owners of renovated cars who willingly support the idea of the Royal Old Cars‘ Race. Since the first edition, the race has always attracted many contestants, also thanks to the atmosphere which has built new relations and has brought nice recollections of the event.

The history of Rzepecki Car

There are already over
200cars 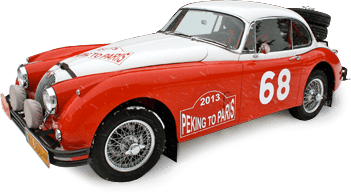 When the owner of an old Jaguar XK150 volunteered for the race Peking – Paris, he heard from the host that the Jaguar would never reach Paris. It was enough for Rzepecki to decide to face the challenge. So he started making a car as durable as beautiful which is able to negotiate the heavy route counting 12247 km, going across the Gobi dessert in Mongolia, through unexplored areas of Siberia and then to the capital of France.

The first customer/client outside Europe

It turns out that the fame of RzepeckiCar extends beyond Europe! Thanks to that, the newly renovated Jaguar XK 150 could be enjoyed by residents of Tel Aviv.

Renovation of the 40th
E-type Jaguar

The E-type Jaguar is the most desirable car in the history of the automotive industry.

Due to its clean lines and the bodywork shape, it has been given a pernament place in the Museum of Modern Art, located in New York. It is a symbol of the swinging sixties along with The Beatles and the mini-skirt.

After receiving a master‘s degree, Lukas, the son of Maciej Rzepecki, joined the team. His knowledge from university and lack of experience brought a fresh look at the company’s development.

In search of high quality along with reasonable prices, more and more enthusiasts of old cars are coming to the Rzepecki Auto company from:

The first Royal Old Cars‘ Race was held in 2002 due to Maciej Rzepecki’s cooperation with the Society of Royal Castle’s Friends.

Since that time the idea of the race has remained the same, which is making the ground for meetings for old renovated cars’owners and dispalying the final effects of restoration as well as promoting the old cars‘ movement in public.

Change of the company’s residence

After many years of residing in the garage at Targowa street, the company was inevitably relocated outside the capital city. Despite its extension in Warsaw, there wasn’t enough room for the constantly growing collection of old cars.

Maciej Rzepecki took off for the first time when he was a student. Many years later, after coming back from Antarctica, he finally received a pilot licence. The adventure with aviation still lasts. Although Maciej Rzepecki is eligible for flying a Koliber or Cessna, he is presently in love with his own super-airy FK 12 Comet.

Maciej Rzepecki graduated from SIMR at the University of Technology in Warsaw. After graduation he worked as a co-designer of a service station at the Polmozbyt company for a very short time because he was already under the influence of his restless nature. Instead of concentrating on his proffesional career, Maciej preferred adventures! In 1989, along with the 5th expedition, he left for the Polish station in Antarctica named after Henryk Arctowski, located on the King George Island. Hired as a technical director of the station, during wintering on the South Shetlander Archipelago, he renovated a bulldozer which had not been working for years. He was also a passionate sailor. Becoming appreciated for his skills, he was appointed to be in charge of two research ships, called „Dziunia“ and „Sea Elephant“.

One of his great passions is the automotive industry and sailing is another one. Selfbuilt Giga, caressingly called ZiZi, was sent far away from Mazury. The choice was Yugoslavia. The brave Nysa was under repair three times on its way because of a faulty engine, but it worked well as a tug boat. It’s worth noticing that the voyage took place during Soviet times and one couldn’t know for sure if there would be a possibility to cross the borders. Luckily for the crew it was possible that time. It turned out that the customs officer was a yachting enthusiast. There is a souvenir of that event, which is the entry in a passport declaration, „Being transferred across the border – Nikon camera and Giga yacht“.

He should have followed in his father’s footsteps who was a doctor. Yet youthful fascinations led him to a completely different path.

At the age of 19, he got the first car, which was an MG-A. Honestly, it was love at first sight. Of course it wasn’t a new car, but one requiring so much work. After finding new parts, remaking old elements and perfecting the bodywork, the car was finally ready for the road.

Although so many years have passed and Maciej Rzepecki has tested a great number of cars, the MG-A still takes the first place in his private ranking.

Cars for sale The Royal Race